Digital signature in ERPNext - what would be the basic steps to implement it?

First, thanks for the great product.

I would like what would be the basic steps to integrate digital signatures in the PDFs generated by the POS services.
I have some basic notions on Python, which seems to have some some stuff related to that.

I just would like to get a general ideia about how would one do that… I’m thinking about creating a custom field that has a code… am I thinking correctly?
I a little confused about filling out the custom field. (I am reading this page: https://erpnext.com/user-guide/customize-erpnext/custom-field)
For example, if I chose code, where am I supposed to write/call it?

You can add it as an image in your Terms and Conditions template.

If you mean to sign cryptographically, what is the open standard for it? Maybe you can use PGP/GPG signature as custom field and write server side code to generate and attach it to the doc.

hm…I think this topic relates to specific countries. We here are having special code signage with CryptoCard…which means no PGP/GPG

Oh which countries? Is there spec for this ? Maybe someone would have written a python library for this…

Thanks for the answers.

I wasn’t much clear, sorry. Let me clarify it:
Generally, the definition of digital signature includes a cryptographic key that uniquely identifies the person that has signed.
On the other hand, an electronic signature is just the image of the signature on the documented., without necessarily having a proof about the person that signed

Some countries require a digital signature to make a document legally valid.

However, at this moment, I would like to have just an electronic signature on ERPNext.
That is, when I would generate a, let’s say, sales invoice, there would be a place for the user to write down the signature (using ERPNext on a mobile phone and having the proper pen) and it would be included in the generated PDF.

So, basically, I need to collect the signature (using html5, php or anything that enables the user to “draw”) and put it on the PDF.

Any ideas about how to achieve that? How complex would be doing that?

It is from Austria.

But basically we have no need to sign invoices for customers…we only have to sign our invoices when we are raising them against an institution that belongs to Austria itself.

But we are actually having the following workflow:

Create a PDF --> Import in Adobe Acrobat --> Use the function to “sign” the PDF.

Austrian companies “should” use this:
http://www.a-cert.at/static/site_a_cert_portal.html

We are using SignEasy from there 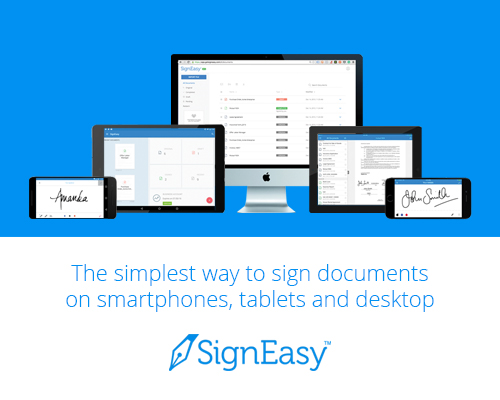 SignEasy is the simplest and fastest way to sign or get documents signed from your phone, tablet and computer.

It just works like a charm and we are really enthusiastic about it!

@rmehta, thanks, the problem is that I wasn’t clear enough. I would like to generate the signature when visiting the client (see my previous post please)

@pdvyas, that would be nice in the future, for now I think that just generating the and embedding it on the PDF is enough (I wrote the details on my previous post).

@daniel, this app looks really nice. Do you have plans to integrate something like this in the ERPNext itself?

@daniel Are you still working on that integration for RKSV Compatibility?
If you are interested to work on that we could set up a project for Netidee and apply for some funding.
https://www.netidee.at/einreichen
At fairkom.eu we have some experience with netidee projects and would be interested to work together.

Are you using this integrated with ERPNext?

I mean, when a Approve some document, and choose print view, it can be autenticated?

anyone using POS with RKSV in Austria?

Has somebody already deal with it? With some of these services (http://wiki.cacert.org/PdfSigning 3) or something similar?

It would be awesome to have, as it can end with a lot of paper!!

EDIT: Maybe someone can try https://www.signserver.org/?? It seams to have a great feat…